BBC Scotland have released full details of where audiences can find its new channel which launches on 24 February 2019.

The positions vary across the different broadcast platforms, with transition taking effect from week beginning 18 February.

Re-tuning will be required on Freeview devices only with all other TV platforms updating automatically before launch. 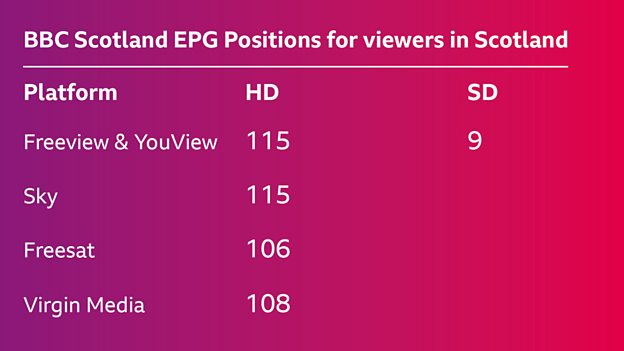 For Freeview customers in Scotland only, BBC Four SD will move to 82. BBC Four HD remains unaffected across all platforms including Freeview.

Sky and Freesat viewers without an HD-capable receiver will instead receive BBC Scotland in SD on 115/106 respectively.

Newly-commissioned programmes span the genres from factual, entertainment and arts to comedy, drama, news and sport, meaning hundreds of more hours of additional content for audiences in Scotland. The channel goes on air at 7pm on Sunday 24 February.

BBC Scotland will be available for viewers in the rest of the UK at the following positions:

Freesat
BBC Scotland HD: 108
BBC Scotland SD: 108*
*Freesat customers who have an HD receiver can also find the channel in SD at 174