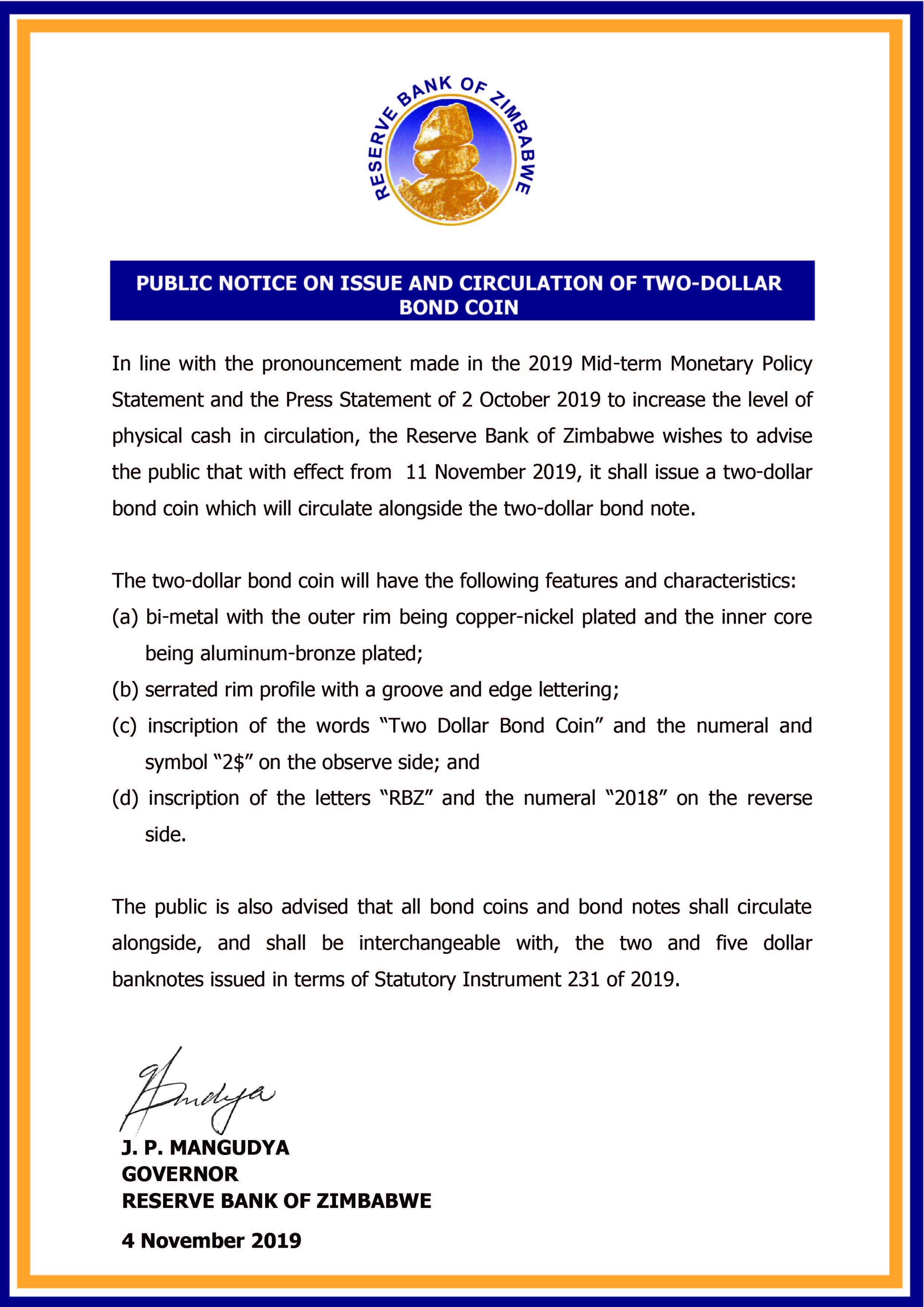 Bond notes to be gradually removed from circulation

Harare (New Ziana) – Bond notes and coins will continue being used as legal tender in Zimbabwe for a limited period of time alongside the new Zimbabwe dollar notes which are being put into circulation this month, a senior government official has said.

Last week, the Reserve Bank of Zimbabwe (RBZ) announced the introduction of new bank notes by mid-November as it moves to end long running cash shortages in the economy.

Zimbabwe has endured biting cash shortages for years now, leading to the birth of a thriving parallel market where cash is sold at premiums as high as 50 percent in exchange for electronic money.

In addition, the cash shortages have also led to the creation of a multi-tier pricing system in the economy, depending on the mode of payment, pushing up the cost of goods and services, and ultimately inflation in the country.

The cash shortages became more pronounced early this year when the country scrapped the use of the multi-currency system which had been in place for 10 years in favour of the Zimbabwe dollar which is now the sole legal tender.

However, government did not immediately introduce new replacement local notes, opting instead to retain use of the bond notes and coins which had been introduced as a surrogate to the USD for local transaction purposes.

Finance and Economic Development permanent secretary George Guvamatanga dismissed assertions that bond notes would be immediately decommissioned once the new notes were introduced.

Guvamatanga said the main motivation behind the introduction of the new notes was to alleviate the current cash shortages.

The new $2 and $5 Zimbabwe dollar bank notes amounting up to ZWL$1 billion will be gradually injected into the market to avoid fuelling inflation.

The new ZWL$2 and ZWL$5 notes will be green and purple in colour respectively while some of their features include the RBZ logo and three balancing rocks on the front.

Guvamatanga said the introduction of the new notes was part of bold reforms that government was pursuing.

The reforms, he said, would yield positive results in the long-run.

“For anyone to believe that let us go on our own (with the reforms) without financial support from anyone, that actually requires boldness and true reformists. For you to make that call you need people who are dedicated to reforms, who are dedicated to making this country right.

The government has removed subsidies on fuel allowing market forces to determine its retail price, resulting in fuel price hikes almost every week.

The government has gazetted the features of the new Zimbabwe dollar notes that are expected to be injected into the system in the coming days.

Reserve Bank of Zimbabwe (RBZ) governor John Mangudya announced last week that the central bank will in the next two weeks introduce $2 and $5 notes, which will mark the official return of the local currency that was abandoned in 2009.

According to a statutory instrument released yesterday, the notes will have the same colour as the $2 (green) and $5 (purple) bond notes that have been in circulation since 2016.

“On the front side of both the $2 and the $5 note, the dominate feature shall be the logo of the RBZ (three balancing rocks), with the visually impaired recognition feature on the left, latent image showing the denomination, optical variable ink with colour shift from gold to green, security thread with the inscription RBZ and see through of Zimbabwe bird looking into the left in perfect register as secondary features,” reads part of the statutory instrument.

“The $2 note shall have an impression of the Parliament of Zimbabwe building and the image of the eternal flame at its back, while the $5 note will have three giraffes and three plain trees.”

Since the beginning of the year, the government has introduced a raft of currency reforms that culminated in the dumping of the multicurrency system in June.

However, the return of the Zimbabwe dollar after a decade of dollarisation has seen a rapid increase in inflation and intensifying foreign currency shortages.

Finance minister Ncube last week said the RBZ will inject the new notes into the system to cure the liquidity crisis, which has crippled businesses and eroded wages.

Some dealers are taking advantage of the liquidity crunch to sell cash at premiums of as much as 60%.