Storyglass was previously a division of Fremantle’s Global Drama department. It now has a much broader brief, and will cover scripted, non-scripted, documentary, true crime, lifestyle, music and talent-led series.

Fremantle, BMG and Penguin Random House have already enjoyed a successful collaboration with the youth culture series This Is Spoke, which won the 2020 Campaign Publishing Awards Best Podcast accolade and is shortlisted at the 2020 British Podcast Awards in the Bullseye Award category; it was a 2020 Webby Honoree in the Diversity and Inclusion category.

Bertelsmann is recruiting for a commercial director to run Storyglass, and will also appoint a creative director.

Baroness Rebuck, chair of Bertelsmann Content Alliance UK, said: “Creativity defines each of these businesses and I am excited to see what this collaboration can produce. Audio has always proved a really powerful tool to connect audiences with great stories, and we are confident that this alliance and the new-look Storyglass will mean we are set up to deliver world-class series.”

Tom Weldon, CEO of Penguin Random House UK, said: “The establishment of this alliance gives us the opportunity to build on all the brilliant work we’ve done in audio over the past few years: from our award-winning audiobook publishing to a number of hugely popular and distinctive podcasts, including the Penguin Podcast and This Is Spoke. By joining together with – and drawing on the expertise and talent of – our fellow Bertelsmann companies, we’re looking forward to taking our ambitions around podcasts to the next level, to the benefit of our authors and our publishing.” 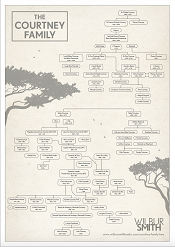 According to a statement from Bonnier, ‘The reactive and expansive family tree connects each generation in chronological order, from Sir Charles Courtney (Birds of Prey) through to Jack Courtney (Cloudburst). Each main character has a click-through biographical page that details their life, adventures and the books they feature in. Readers and fans have the opportunity to contribute to these pages, elaborating on elements and growing the details in order to create an evolving, immersive, user experience.

‘The Courtney Family Series consists of over twenty titles to date, with at least five more planned, and is one of the longest running series in publishing history. Spanning multiple generations and with settings across the globe, every Courtney title has hit the bestseller lists since Wilbur Smith’s debut, When the Lion Feeds, in 1964. Earlier this year a new generation of Courtneys was introduced in Cloudburst, the first in the Jack Courtney Adventures, Wilbur Smith’s debut series for children. The latest adult title, Ghost Fire, publishes in paperback in August.’

Wilbur Smith said: “I am delighted to confirm that the Courtney family saga is the longest running series in publishing history. My paternal grandfather, James Courtney Smith, who could hit a spittoon from six yards without touching the sides, taught me how to tell a good tale. I’d like to think he’s smiling beneath his tobacco stained moustache somewhere up in heaven as the namesake for this family of heroes and villains.”

Kate Parkin, managing director of the adult publishing division at Bonnier Books UK, said: “The Courtney Family Tree is an exciting and innovative addition to the rich and immersive experience awaiting adventurers who visit the Wilbur Smith website. It has been a pleasure to work with Wilbur and Niso Smith in mapping the Courtney world in this way.”

Blake Brooks, brand and marketing manager for Wilbur Smith, said: “It has been a joy working with Wilbur and Niso Smith, and the team at Threekey, to bring this immersive extension of the Courtney Series to Wilbur Smith’s dedicated and enthusiastic fans, and enable a clear introduction into the series for readers lucky enough to be experiencing the books for the first time.”

The Courtney family tree is live now at wilbursmithbooks.com/courtney-family-tree.

In a presentation from Nielsen yesterday (16 July), reviewing the book market performance for the first half of the year, Hazel Kenyon said that the UK market is beginning to recover, with David Walliams in particular performing strongly.  His titles Slime and The World’s Worst Parents have joined Pinch of Nom, The Mirror and the Light and The Boy, the Mole, the Fox and the Horse in a number 1 slot in the monthly bestseller charts so far this year, with the latest four-weekly period (7) up to 11th July showing an increase of 19.1% in value terms and 17.6% in volume terms over the same period in 2019.

Philip Stone revealed that the Irish market, which started the year strongly but then went into decline during lockdown, is now almost back to pre-lockdown levels.  Consumer confidence in Ireland seems to have returned even before the country came out of lockdown, and by week 20 the Sally Rooney effect had taken the market back into growth.  Sales of Normal People in 2020, boosted by the hugely successful TV adaptation, are now ahead of the number one bestseller in Ireland from 2019 – also Normal People.

Nielsen has also been conducting research to understand the impact of COVID-19 and lockdown on reading and book buying habits in the UK, so far undertaking three waves of fieldwork covering 29 April to 1 May, 13 – 15 May and 25 – 29 June.  Steve Bohme revealed that in the latest wave almost two in five of the UK population reported that they had been spending more time reading since lockdown, although this was 3% points down on the numbers in the first wave, when lockdown was more widespread.

This increase in reading does not appear, however, to be matched by numbers buying more books, with many saying they are reading books they already own or borrowing books from friends – although just over a quarter of UK adult’s report they have been buying more books in lockdown.  Having children at home has been a significant barrier to parents reading more in lockdown, even if this has simultaneously encouraged growth in the home learning book market as well as in the proportion of parents reading books to/with their children.

Woman under 55 and younger men (25-34) are the groups most likely to have been reading books more overall, while increases in audiobook listening are most likely to have been reported by men under 45 and younger women (18-24).  Data from Nielsen’s longitudinal consumer study, Books & Consumers, has been tracking an increase in audiobook consumption for a number of years now, with ebook purchasing in decline over the period.  April data, interestingly, shows a resurgence in the buying of ebooks, alongside continued growth in audiobooks.

Wave 3 also looked at the likelihood of consumers going back into bookshops. Already 8% of pre-lockdown bookshop users had done so, with another 45% saying that they intended to visit a bookshop in the foreseeable future.  A third of bookshop users were either unsure or wanted to see the full impact of COVID-19 before deciding when to do so, with only 5% saying that they didn’t expect to visit a bookshop (though this increased to 13% of all book buyers).

Cautiousness about returning to bookshops increased with age, with half of all book-buyers aged 65+ unsure about when they would visit a bookshop.  Those most likely to visit a bookshop in the next four weeks were keen to support booksellers, help the economy and encourage a return to normality, and were less worried about the difficulties of social distancing and handling books than those who were likely to wait four weeks or more to do so – even though the latter were also keen to provide support for local shops.

Nielsen has compared the number of titles with UK publication dates in the first half of 2020 with those for the same period in 2019, and there does appear to be a clear reduction in April from publishers postponing releases of titles.

In April 2019 there were 24,000 books published in the UK, compared to only 13,000 books recorded on Nielsen’s database as published in April 2020. However, April last year was a bumper month for publication, and that the average number of published titles per month across 2019 was 17,000.

The data can’t predict whether all these postponed titles will appear in the second half of the year, or whether many will now be held over into 2021.

These figures include all titles published using an ISBN prefix allocated by the UK & Ireland ISBN Agency, so will not include any self-published titles without an ISBN.

The series is based on the Roald Dahl Funny Prize award-winning book by Louise Yates, which is published by Red Fox.

The 52 seven-minute episodes debuted on CBeebies at the beginning of March. Overcoming challenges posed by the pandemic, episodes 26 to 52 were still delivered according to schedule to CBeebies, ABC and KiKA at the end of May, with post-production undertaken in full compliance with the tight lock-down regulations using remote virtual working by the studio team.

Komixx Entertainment Head of Development Melanie Halsall said: “Dog Loves Books tells the story of a loveable duo who like nothing better than getting into a good book, quite literally. Dog and Pug simply love books, from the smell to the touch to the sound of them, but most of all because of the adventures inside them. This series is a celebration of literature and of books, taking young audiences into imaginary situations that come alive in worlds hidden between book covers.”

Established in 2007, Komixx Entertainment is an independent film and TV production company headquartered in London, with offices in Los Angeles and Perth.