New reference imprint Britannica Books is launching on 1 October 2020 with the Britannica All New Children’s Encyclopaedia, edited by Christopher Lloyd. It is the first encyclopaedia printed with Encyclopaedia Britannica in a generation, and is followed by 5-Minute Really True Stories for Bedtime, released in illustrated hardback and audiobook on 15 October. The audiobook is read by Joanna Lumley, and a proportion of the proceeds will go to Book Aid International.

Britannica Books is a new reference imprint for young readers created by What on Earth Publishing and Encyclopaedia Britannica.Developed by Sally Symes, 5-Minute Really True Stories for Bedtime includes original writing by Symes, Rachel Valentine, Jackie McCann and Jen Arena, with all information verified by Britannica. Lumley, who recorded the stories as lockdown began, said: “I could not think of a better way to make a small personal contribution in these difficult times than by making these beautiful stories about the magical world available for younger people to listen to as they fall asleep. After recording all 30 stories, I came away with a spring in my step, feeling a little younger and a little wiser for it.”

Christopher Lloyd, CEO at What on Earth Publishing, said: “In these 30 stories, Joanna’s wonderful voice and personality calms, soothes and fills the minds of younger people with wonder and awe about the world of night-time. And it’s not just younger people who will love them, as Joanna herself said, she has learned all kinds of things that she didn’t know!”

Faber Children’s has launched a new website to showcase frontlist and backlist titles, as well as resources for parents and teachers. The site will feature, as well as book selections, author videos, activity sheets and lesson plans.

Leah Thaxton, publisher, said: “Never before has it been so important to support teachers and parents. We believe our purpose-built new website, launching today, provides an accessible and essential resource, helping connect our authors with their readers, providing brain food for children.”

Scott Evans, the Reader Teacher and founder of #PrimarySchoolBookClub, said: “It is so brilliant to see a forward-thinking publisher like Faber investing in and creating a purpose-built website like this that will help to bring books like Letters from the Lighthouse, The Legend of Podkin One-Ear and When Stars Are Scattered even more to life for children in classrooms and schools to read, enjoy and learn more about. With a hub of teaching resources, activity sheets and author video content all in one place for both their high quality and quantity of children’s books, teachers and parents need look no further!”

Kathryn McCarthy, assistant headteacher at Blanche Nevile Primary School for Deaf Children, said: “We were very honoured that Faber Children’s agreed to work with us to create a BSL (British Sign Language) version of their beautiful story While We Can’t Hug so that it could be enjoyed by our Deaf pupils, their families and the wider Deaf community. I really enjoyed exploring the new Faber Children’s website. It is very easy to navigate and is visually appealing. It’s a great addition to include video interviews with authors so our pupils can get to know the author behind the name. We will definitely use it as part of our library and guided reading sessions especially as it covers all age groups!” 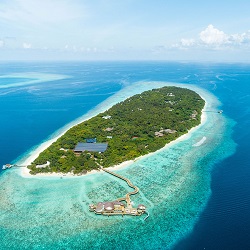 Philip Blackwell’s Ultimate Library, in partnership with Soneva Fushi, a 5-star luxury resort on Baa Atoll in the Maldives, opened the first Pop-Up Bookshop in December two years ago amidst worldwide interest.

The shop will be opening its doors once again in November. According to the job ad running on BookBrunch today: ‘With Soneva Resorts best-loved for its Robinson Crusoe-style laidback luxury, the return of the Pop-Up Bookshop creates the ultimate vacancy for a desert island bibliophile:  barefoot bookselling, in one of the most beautiful places in the world.

‘The bookshop was created to reflect the stunning natural environment and intelligent luxury that Soneva Fushi provides. While most of us find that holidays are the only opportunity we get to read for pleasure, finding the perfect book that enhances your destination and opens your mind can be a challenge. Previous Barefoot Booksellers have provided guests with unforgettable literary experiences from writer’s workshops to personal reading consultations. We are interested to see what new ideas you can bring to the role!
​
‘The lucky individual will have full pre-departure product training with the Ultimate Library team, prior to flying to the Maldives to join the Soneva team for a 6-month placement ending shortly after Easter 2021. The ideal candidate will be an experienced bookseller/publisher and a team player with a passion for books and the ability to engage with guests of all ages.

‘They will have excellent written and verbal English skills; a lively tone of voice to write an entertaining blog that captures the exhilarating life of a desert island bookseller, and the skills to host workshops and other guest experiences. They must have the ability to fit in with the distinctive Soneva culture.’

The story of the first Barefoot Bookseller was broken by BookBrunch in August 2018, and picked up widely by national and then international press, leading to a total of over 5,000 applications from all over the world. According to @barefootbookseller, Hugo Wilson ‘started the journey in October 2018 and passed the baton on to Aimee Johnson from Penguin Random House, Ireland in January 2019 who closed the shop for the season on May 28th.’ Chrissy Ryan then took the shop over for the second season.

Faber released a full list a few minutes ago of the dozens of leading writers, plus fellow indie publishers and journalists, who are supporting its call for Dangarembga to be acquited of all charges brought by the Zimbabwean government. Last week she was shortlisted the Booker Prize for This Mournable Body (Faber & Faber).

In her native Zimbabwe anti-government protests were called by the opposition to coincide with the second anniversary of President Emmerson Mnangagwa’s election victory on 31 July. Ahead of the day, the president had described the demonstrations as “an insurrection to overthrow our democratically elected government” and declared them illegal. Dangarembga (pictured) was with one other person standing at a road junction and wearing a placard when she was arrested on 31 July.

Before her arrest, she had said: “Friends. Here is a principle. If you want your suffering to end, you have to act. Action comes from hope. This is the principle of faith and action.”

According to a statement from Stephen Page, ceo, on behalf of Faber: ‘On 31 July, President Mnangagwa deployed heavily armed soldiers and police onto the streets of the Zimbabwean capital city, Harare, where hundreds of activists and opposition leaders were set to stage a peaceful protest against the ongoing economic crisis and human rights abuses in the country. Tsitsi Dangarembga was one of those protestors. She was peacefully protesting with one other person against the current Zimbabwean government.

‘As she faces trial, we at Faber & Faber stand with Tsitsi Dangarembga to demand her acquittal and we urge others to support her cause. By joining together and raising our voices, let the power of our collective call effect change.’

The statement is supported by: