The latest personalities to share their favourite reading on Bookshop.org are historical romance writer Julia Quinn and members of the cast of Bridgerton, the much hyped, Regency-set Netflix series based on Quinn’s bestselling novels (Piatkus/Little, Brown).

Nicole Vanderbilt, MD at Bookshop UK, said: “With Bridgerton fans looking forward to seeing this beloved series of novels brought to life on screen, and so many more about to discover Julia Quinn’s world, we’re delighted to be working with Netflix and Little, Brown to encourage readers to support independent bookshops when making Bridgerton-inspired book purchases online.”

Other authors who have shared their reading lists at Bookshop.org include Elena Ferrante, Malorie Blackman, Max Porter, Nikesh Shukla, Eimear McBride, Emma Gannon and Melissa Harrison. There are also lists from more than 2,500 affiliates – authors, publishers, bloggers and influencers. More than 350 independent bookshops sign up to the site.

Customers who nominate bookshops at Bookshop.org ensure that 30% of the sales proceeds go to those shops. There is also a general pool, distributed to independents; and affiliates receive 10% commissions. 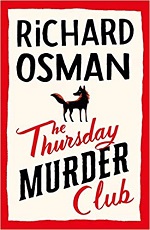 The novel sold 134,514 copies in the week ending 19 December 2020, more than twice as many copies as the next bestselling book, Barack Obama’s A Promised Land – also published by Viking. As such The Thursday Murder Club becomes the first debut novel to take the top slot at Christmas since official sales records began in the late 1990s, and the first adult novel to top the Christmas list since Dan Brown’s The Lost Symbol in 2009.

David Walliams had claimed three of the previous four Christmas number ones, but his WWII-set children’s novel, Code Name Bananas, has to settle for third place in the Christmas chart—ahead of last week’s number one bestseller, Kate Allinson and Kay Featherstone’s Pinch of Nom: Quick and Easy.

Nielsen Books & Consumers consumer research data found that, during the first lockdown, overall book sales were relatively flat year-on-year in value terms with a 5% decline in spending on printed books offset by growth within the ebook (+23%) and audiobook (+14%) sectors.